We were filling our cooler in front of Faler’s General Store when the nice woman asked, “Are you going up in the mountains or coming down? You’ll want to take some mosquito repellent. The Nile virus has shown up here. We’ve had a horse die, and a couple of elderly people have gotten sick.”

In the dry midday warmth of early September, the threat hardly seemed imminent, although I pitied the poor horse. We were in western Wyoming, where heavy-duty pickups wear sturdy wire screens over their grilles. A bumper sticker declared, “I Brake for Moose,” and a license-plate surround said, “Too close for missiles, time for guns.” The trading show on the radio presented opportunities for a seven-ton wood splitter, a Magic Chef range, and a 1993 Toyota pickup for an asking price of $5000.

The host said, “I don’t know why people put a ‘W’ in front of it. They’re Easterners, I guess.”

I don’t remember what he was talking about. Maybe whales? Whores? Gee whillikers! If you don’t put a “W” in front of Washoe, by which name Mark Twain called Nevada, you have “a shoe.”

After leaving Pinedale, we soon had to stop. The numbers on the map weren’t matching up to those on the roadside markers.

But then the numbers did reconcile and we soon found ourselves climbing into McDougal Gap in the Wyoming Range. Yarrow, asters, and late-blooming lupines festooned the meadows. We got out and walked a disused track leading up to Shorty Kleinstick’s abandoned mine. When the Forest Service wouldn’t build a road through the Gap in the late 1930s, Kleinstick cussed them all and used his own bulldozer for a DIY job. Hiking through some pines, we were scaring each other with bear stories when a tremendous racket went up and some large animals abruptly stirred. We froze in our steps. They were sandhill cranes, crying, “Garook! Garook!” Two of them lifted up and followed the contour of the hill through the trees, but the third skimmed right overhead, presenting a terrifying sight to behold. Whooping cranes may be bigger, but it’s hard to imagine any bird more menacing.

Although the mine offered little beside tailings, we could see iron rails leading into the entrance. (I do not refer to rails, the wading birds, although the image is tantalizing.) A handful of men working together would take out up to 1100 tons of lump coal in a season lasting 80 to 100 days. (Down in Pinedale, the frost-free growing period lasts only 55 days.) Such a generous haul of the bituminous substance would be enough to fill the Christmas stockings of bad boys and girls throughout a wide region. The Kleinstick miners used black powder to blast out the bright-burning stuff. Not far away, their concrete powder house was partly filled with firewood, with a couple of Budweiser cans thrown in for good measure. Before I had rendezvoused with Gunnar the previous day—we were doing a travel story for an advertising supplement that Dodge had scheduled with Automobile—I had been at Fontenelle Reservoir, which was down the road from Pinedale, and seen many flocks of pelicans on the water. They had black wing tips. I professed astonishment at the birds’ wearing shoes.

“They change to black after Labor Day,” Gunnar said.

This was the second assignment we had shared. I was pleased to work with him again because of his wry wit and his knowledge of nature and the land. And he’s well-read. He said he liked working with me because, as compared to other writers from Automobile, I didn’t drive like a madman.

After we had settled into our place for that first night, a cabin at Half Moon Lake, we took a drive up to the Fremont Lake overlook. While he shot pictures from the vista point, I scrambled around on boulders and came back with a Bud Light can, which disgusted me.

“What do you expect of light beer drinkers?” he asked.

At breakfast the next morning, before we had even gotten started in exploring the Wyoming Range, I opened my reporter’s notebook but could find nothing to write with.

But beside his smart remarks I have an enduring fascination with what he eats. When I had met him in Pinedale, he got out of his truck munching on Fritos, which led me to express surprise; but he said they’re really not junk food, just corn and oil and only representing calories, not cholesterol. For dinner he consumed shrimp cocktail and a baked potato and limited himself to one beer. He frequently snacked during the day, indulging in peanuts and Braeburn apples, which variety he said was the winner in a taste test among 20 others. 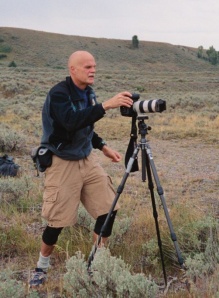 He would also unseal a bag of soy jerky, which filled our capacious Durango test vehicle with the odor of sweaty socks. I spurned his generous offer to try some. On general principle, I refuse to eat food that might also be served underwater on a treble hook for channel cats. However, maybe if those old folks had inoculated themselves with soy jerky, the Nile virus would have been stopped cold. Maybe the unfortunate horse could also have been saved by accepting a strip of this reeking nutriment through its quivering lips.

Whereas I had been getting fat—we’re about the same age—Gunnar was trying to gain five pounds. His athletic leanness came from hut-to-hut skiing in the mountains of Colorado, among other strenuous activities that he participated in, which tend to make adipose tissues disappear like witnesses to a drive-by shooting.

The next morning we went to Schwabacher landing, on the Snake River, where we had a nice panorama of the Tetons. A cow elk and her calf crossed from bank to bank when we rolled up. Two other vehicles were parked in the lot. One belonged to a Wyoming couple who had gone up the river spotting beaver with a scope. The other belonged to a young Colorado couple, and if not for their three playful dogs I would have guessed honeymoon. The man was off in the bushes with his camera and tripod, while the woman sat on a rock writing postcards. A layer of clouds kept the highlights off the mountain peaks, displeasing Gunnar. He called my attention to the Eurostyle jaggedness of the summits—instead of being an almost featureless massif like the Wyoming Range. Dirty patches of snow and a small glacier clung to the slopes. While we took all of this in, coyotes yipped and howled, and I startled him by saying it was the first time I’d ever heard them.

After the photo shoot we went into Jackson for breakfast. Gunnar shook up his protein drink, which he supplemented with two scrambled eggs. In comparison, my three oatmeal pancakes and two poached eggs represented gluttony. But at least this was the local mode. Later we went to Oxbow Bend, inside the national park, and watched a mother moose and her calf browsing in a willow thicket. Mama was a messy eater, with morsels dangling from her mouth. Before long they both plunged into the river. Holding their heads high, they swam across stream to an island, where they scrambled and struggled to land their hooves. Finally splashing out of the water, they shook themselves like enormous dogs.

Alerted by our own vigilance, dozens of park visitors had pulled their cars to the side of the road to watch and take pictures.

One thought on “Gunnar the Quip Shooter”