Greetings from Tamarindo! I’m looking through the dark at the light rope around palms in the courtyard of the Portofino, where I’m staying. It’s 6.38 p.m. The day started gruesomely more than fourteen hours, ago in Ann Arbor, where a foot of snow had fallen Sunday night and yesterday morning. Susan took me to the airport. Most of my in-flight reading was provided by Don DeLillo. Note today’s shorter sentences as the result. I flew through Miami to Liberia, Guanacaste Province, Costa Rica. There I caught the Tamarindo shuttle ($18) for the fifty-five-kilometer ride to Tamarindo. The other passenger, Mario, a tennis pro from Cincinnati, had come in on the Continental flight just before mine.

I arrived at Portofino around 4.00 p.m. After unpacking, I went to Super 2001. It’s only a few steps away. I spent the equivalent of $31 on groceries. Here I reproduce the list (prices in colones): 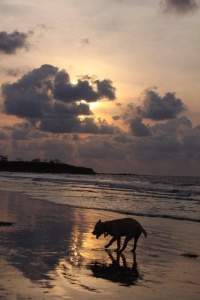 It came to $31. Three American girls were crowding me at the register. One was nearly popping out of her bikini. They were from Indiana and Illinois. I mean the other two girls. The leading, popping one spoke a bit of Spanish. I told her the reason I was paying with dollars was due to my recent arrival. That’s when she asked where I was from, and I said Ann Arbor and she lit up.

So far I’ve eaten one of the three bananas. Then I unpacked the camera and went to the beach for sunset. As I readied, howler monkeys were inveighing implacably against nuclear Iran. I waded cautiously into the water. Last year at this time, the water was cold, unlike 2008. The 2010 water is warm again. I asked a fisherman, who said it has to do with offshore winds. This season hasn’t been so windy. His name?

“Are you Costa Rican?” (Of course this was in Spanish: I’m in a Spanish-speaking country; therefore, I’m speaking Spanish: “Eres tico?”)

“Really! What part of Italy?”

I tried to remember the capital city as a way of impressing him, but couldn’t. I know Kathy Diehl will be disappointed, for she was there just a few months ago: Cagliari.