Something is causing nicknames to fall into disuse. Did a celestial body approach too near earth, causing people to forget to call one another Toots and Buster? Or maybe derogation just isn’t as amusing as it used to be. Yes, we Americans remain inclined toward informality, but the rise of personal branding and new models of identity being distributed through mass media have quashed old-fashioned nicknames like Pops and Red.

Not to mention that you just can’t single out anyone for a physical attribute or weakness.

If Fatty Arbuckle lived today, we would call him Roscoe.

There were two factors behind the prevalence of nicknames in our democratic society. One had to do with every man being equal. Even with a great difference in earnings and social status, a cabbie could bid adieu to his fare: “Thanks, Bud.” (That’s more English than cabbies speak nowadays.)

The second factor was related to the restricted pool of given names. More often than not, WASP or Catholic boys’ namesakes were apostles, authors of the gospels, and a few notable saints. My Catholic school had a surfeit of Johns and Stevens. To separate one John from the other, it might have once paid to hang a unique tag—Honest John, Little John—but already in the 1960s we were beyond nicknames. They were just part of the lore we grew up with.

I miss them, although thinking what nickname might have been applied to me makes me cringe. I’d have taken a place over a characteristic. Ron “Louisiana Lighting” Guidry, the Yankees’ great pitcher, and Wahoo Sam Crawford, the power-hitting Tiger outfielder from Wahoo, Nebr.,—those are my kind of nicknames. Ronald “West Omaha” Ahrens sounds lame, though.

Minnesota Fats, a fictional character whose identity was embraced by a real person, straddled the line. Places have class, bellies don’t. Same for smooth pates (Charles the Bald), balky palates (Louis the Stammerer), and enormous schnozzolas (even if Jimmy Durante encouraged that one for himself).

As it happens, the seven-footer resents being called Stretch, the anorexic loathes the name Twiggy, and imagine the consternation of the awards-show host and recipient when the announcement comes: “It goes to Blind Lemon Jefferson.” Fats Waller, Chubby Checker, and Fats Domino held their sway, but nowadays if a witty scribe in the music press came up with a tag for circumferential Brittany Howard, of Alabama Shakes, there’d be a hue and cry, Twitter would erupt about lack of compassion, and Congress would investigate. Basketball has Tubby Smith, but we’ve forgotten him in his obscurity at Texas Tech. At 6’5” and 270 lbs., Tiny Lund, winner of the 1963 Daytona 500, was more a giant than slob and demonstrated agility every time he slipped in and out of his stock car.

Looking at images of these aforementioned flabby characters, especially in their youth, we find none as large as the clientele presently stomping through Walmart. Names like Fats and Chubby would hardly suffice in the women’s XXL cinched-waist romper department. In the face of today’s exploding immensities of fatness, Tubby fizzles out.

The cultures of music and sports had always condensed the social trend. Males received nicknames, especially if they excelled the norm of performance or behavior. Locker-room camaraderie extended into the play-by-play booth, too, and announcers felt compelled to dub ballplayers something. Usually it wasn’t too original: Kid or Lefty or the Cleveland Browns’ placekicker Lou “The Toe” Groza. I grew up listening to Lyell Bremser’s Nebraska football broadcasts on Omaha’s KFAB and regarded the play-by-play man as the best anywhere, even though he was the only one I’d heard. (I had a high opinion of everything in my home state.) Johnny Rodgers, an Omahan, used speed and shifty moves to help the Cornhuskers win national titles and earn the Heisman Trophy for himself, but the best Bremser could do was Johnny “The Jet” Rodgers. The player had other ideas; as a pro, he called himself The Ordinary Superstar.

Soon, another Cornhusker, this one from a small farming town, would stick his nose into the line on third and short, prompting Bremser to snap, “Tough Tony Davis, the Tecumseh Tornado!” We found it stirring. In fact, among the autumn’s supreme highlights, it ranked just ahead of the first flight of honking geese migrating south and the first howling blizzard that would close the schools even before the official start of winter. We Nebraskans led rich lives.

Politics and national affairs had their own locker room cultures and glib narrators, the combination that promulgated nicknames from His Rotundity (John Adams) to His Little Majesty (5’4” James Madison), from Honest Abe to Tricky Dick, from Stonewall Jackson to Scoop Jackson. Was Old Hickory, Andrew Jackson, older than Old Tippecanoe, William Henry Harrison? And of course, Bush the Second’s administration included Scooter Libby, who scooted in, then got broomed. But more so, my boyhood was filled with wonder at leaders’ patrician names like W. Averell Harriman or Adlai Stevenson just different ones from those of my schoolmates: for example, Lyndon Johnson and Everett Dirksen, J. Edgar Hoover and J. William Fullbright. Ye gods! Washington, D.C. was so stuffy!

With my generation, nicknames started to fade away like the hats men wear in old photos. Whereas my father was known as Butch and an aunt was Toots, we kids only were branded with diminutives: all five of us had pet names ending in “ie”: Ronnie, Katie, et cetera. Hmmm. (Ronnie “Northwest Omaha” Ahrens—maybe we’re going places.) Whereas my father knew men named Porky and Stoney and Bugs, I remember one schoolmate called Bud—that’s it. We were moving away from vernacular culture to a homogeneous prefab one. Overpowered by the loudspeakers encased in TVs and hi-fi units, a casual comment no longer stuck as your identity—a good thing because a preponderance of men since the 1970s would be known as What a Dick! 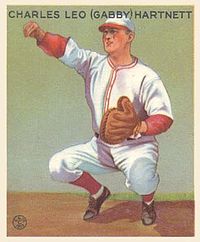 I see the trend holding. The Big Leagues will never again see the likes of Gabby “Old Tomato Face” Hartnett or Frank “The Big Hurt” Thomas or Mordecai “Three Finger” Brown. (Take heart, July 4 fireworks victims Jason Pierre-Paul, of the New York Giants, and C.J. Wilson, of the Tampa Bay Bucs: Three Finger mangled his hand in farm equipment; Jim “Catfish” Hunter, whose nickname was coined by Charlie Finley, had lost a toe in a hunting accident.) The question has become: What will a shoe sponsor put up with? Michael Jordan’s style led to His Airness, and it has limberness in marketing applications. Were Willie Mays a Major League rookie today, the Say Hey Kid would be sleekened to mere initials, SHK, or exchanged for something with menace or grandiosity.

Music and sports continue to drive the culture of naming, but it’s a different thing, and instead of promo men, the subjects themselves in control. Madonna, Prince, Flea, Snoop Dogg, Lady Gaga, Pink, Diplo, Lorde: I don’t know their real names—oh, wait, Madonna is her real name—but they’ve seen to it there will be no more Clarence “Gatemouth” Browns or Lightnin’ Hopkinses.

In sports, the star becomes shorthand: LeBron, Kobe, D-Wade, Carmelo, Gronk, Serena, Coach K., A-Rod, and Dale Jr., are beyond nicknames. Eldrick Tont Woods’s father chose Tiger for his son, honoring a friend. The best to originate in the locker room is Megatron for Calvin Johnson, after a Transformers character. But the press, with style restrictions everywhere, no longer actively engages in the process.

The names for youngsters leaves no room for substitute. Wee Wyatt, Connor the Greek, Hot Rod Joshua? Naw. Besides, there’d have to be some banter leading up to all of it. Instead, the lads are too busy texting and gaming.

If the actor Gabby Hayes lived today, we would tell him, “Shut up!

2 thoughts on “As PC came in, nicknames swept beyond the outfield, out of the jukebox, even the ballot box”