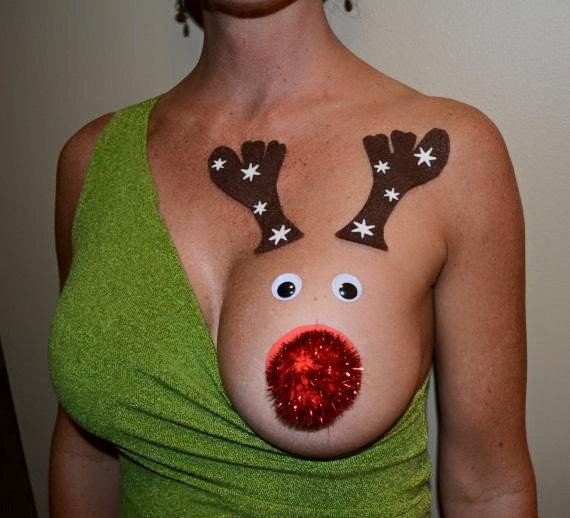 Today, Christmas Eve, I searched Facebook for J.McG., a former employer. Opening one likely J.McG. page acquainted me with the photo you see here. “How Christmas costumes have changed!” the wrong J.McG. quipped.

Scandalized, I nicked the photo before Zuckerberg could nix it. I’d throw it with a big splat against my wall. But would it cause outrage? I’m no Trump. My diffidence lets opportunities slip away. In a recent seminar on ethical decision-making by autonomous cars, we saw a picture, taken from the driver’s position, of a bouncing ball and and boy stepping in front of a parked vehicle. The presenter asked: What’s the guidance system’s right calculation? I yearned to blurt the obvious: the ball’s inflation pressure.

Rather than post the Christmas boob, I messaged 16 friends, one man and 15 women, who might appreciate the gag.

“I’m too chicken to post this on my feed but think you’ll get a kick,” I wrote. 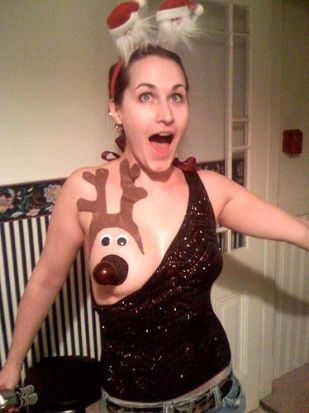 It was eventide in Wales, where one said, “Post it you chicken!! :)thanks for idea I was struggling with what to wear to the carol service hahaha”

My response: “I have some ultra-feminist friends. So I have to conceal it. But I’m glad to supply inspiration. Please send a photo from the carol service!”

“Good luck with with the ultra feminist,” she wrote, “at least she might pay for dinner :):) is that your thinking behind it?you men are all the same :):) ho ho ho:)”

Soon I heard from an observant Mormon in Mormonland. When she posts selfies and portraits showing her whole body, she wears those dumb knee-length shorts popular with Utahans who are covering up their sacred garments. There are mills somewhere, probably in a country the Mormons conquered by thunking everybody with triple combos, that make said apparel for Zions Merc.

“Wow! Merry Christmas Ronald! You are one of my favorite people!”

“I sent this to a select group, some of whom say it’s startling or in bad taste, while others merely excoriate me. And there are three or four sourpuss ultra-feminists to whom I’m not sending it at all. One of them dislikes babies and dogs. In her stridency she declares the well-lit, women-only portions of German parking garages to be sexist.”

“Well I appreciate anyone who seeks to make others smile!” 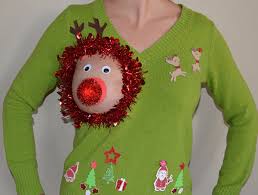 She has an important career, is involved with family, ambitious in sewing and cooking, and can take apart and reassemble her car before racing it at Nürburgring. Yes.

She rode her motorcycle over every pass in the Alps.

“All the rage in Germany!” she writes of Rudolph boob. “I’m woefully underequipped to sport one of those, though.”

“Oh dear. I am glad you did not share that elsewhere.”

“I’m told it’s all the rage in Germany.”

“That does not surprise me.”

“Europeans don’t have hangups about boobs like we do.”

“You have excellent taste.”

The man among the 16 finally weighed in. “Hahahahaha that made my day merry Christmas.”

“Awesome use of scarce real estate,” replied a woman.

My high school classmate sent a selfie from his snowy backyard: “Your good cheer will be copied and sent near and far!”

He promised not to depict his silver balls.