Stopping for gas in Lucerne Valley, California, might show you any number of things: tumbleweeds, bulk haulers coming from the mine, cowboy shirts and hats in the general store. If you’re riding the Ducati Multistrada 1200 S, you’ll also see just how exotic your motorcycle is.

One Sunday afternoon in November, I was refueling the Multistrada at this sweetly named crossroads before going up to Big Bear Lake. Over the same territory, the Big Bear Hare ‘n’ Hound race used to be run during the carefree 1950s, helping to make legends. Aub LeBard and Dave and Bud Ekins routinely prevailed over others riding large-bore BSA, AJS, and Matchless motorcycles as well as smaller bikes from Zundapp, Maico—and a Montesa ridden by Dan Gurney. 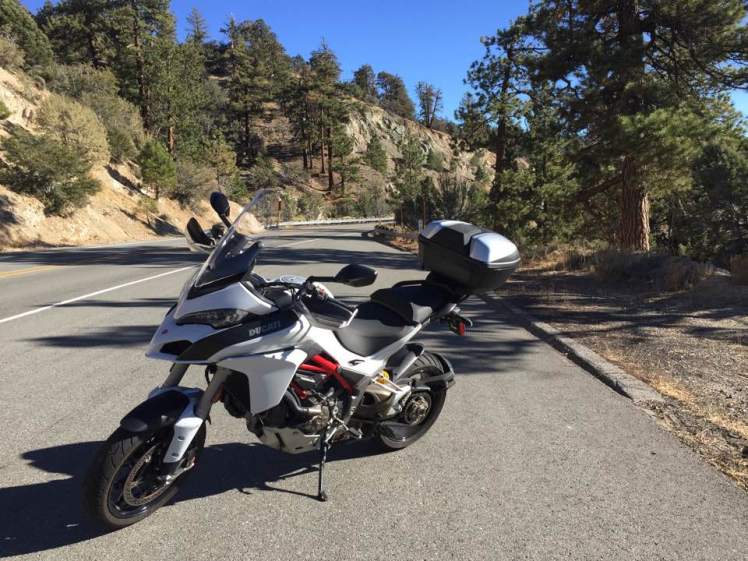 But my purpose was just a highway tour on the last great weekend before snow came to the high elevations. Not even with the Multistrada’s riding mode set to “Enduro” would I be leaving the pavement.

In certain Los Angeles neighborhoods—Venice, West Hollywood, Silver Lake—Ducatis are as common as gourmet coffee shops. Not so here, about 100 miles away, in the southwestern corner of the Mojave Desert. During my pause in Lucerne Valley, a group of vintage BMW R and K bikes passed by on the road—a unique sight by itself—and some Harleys rattled along, but the Multistrada stood out like a spaceship. It would be hard to explain to anyone about the bike’s eight-stage-adjustable wheelie control or the cornering lights that sense lean angle and flash a supplemental beam around the curve.

I felt even more alien after walking across the pavement to ask a guy about his all-original 1963 Chevy truck. He was parked in the shade of the station and stood there eating the burrito he had just bought inside. (Of the many indignities I’ve suffered in life, a gas station burrito has not been one of them.) Chevy guy told about finding the truck in Eagle Rock, the L.A. neighborhood near Glendale, and bringing it back to life and his plans for it. He opened the hood to show how smoothly the V-8 ran.

As I was leaving he flabbergasted me. “What about the helmet law?” he asked. I’m never ready for conspiracy theories, political correctness, or helmet deniers. From my open mouth, Martian words would have come out, so instead I gave him thumbs-up and returned to my pump.

Getting onto the Multistrada requires a high leg kick over the pillion, but once seated 33.3 inches above the pavement I loved the upright, tall riding position, which let me see through the glass of crossover utility vehicles and gave a real feeling of command. Despite the bike’s size, it’s easy to ride slow or fast. Controls are light, and the transmission’s action suggests the fundamental involvement of Swiss watchmakers.

The ride is comfortable, with plenty of suspension travel. Maybe with a passenger and lots of luggage onboard (I’d removed the side bags), it would be necessary to play with suspension adjustments. But today I left everything alone and was perfectly satisfied. 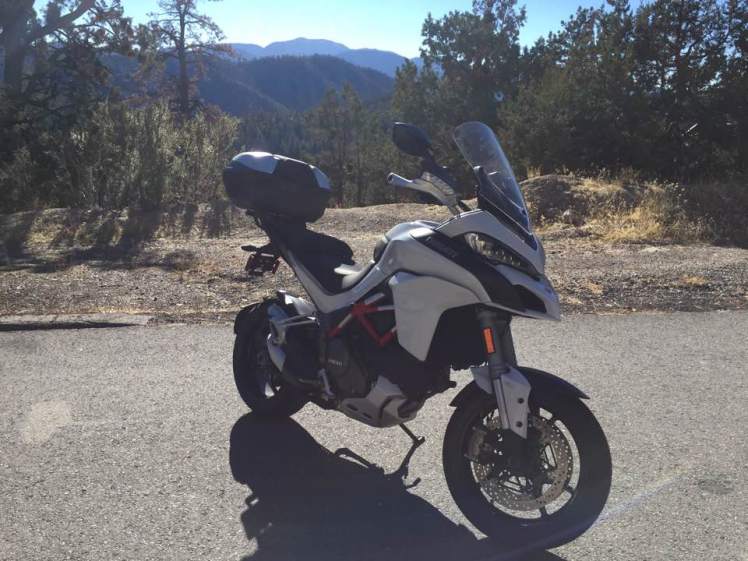 From the junction in Lucerne Valley it’s 10 miles to the San Bernardino National Forest, and on this stretch of Route 18 the Multistrada reveals itself as a superbike. There is one last opportunity to pass a slow car before Mitsubishi’s Cushenberry cement plant, which sits at the National Forest’s boundary and serves as a harbinger of the steep, twisting climb to come. Cracking open the throttle delivers the desired result of astounding, thunderous acceleration: the Multistrada mauls the slowpoke car, and the road ahead is all mine. Whether on sweeping turns, tight ones, or a squiggly course that looks like the road needs to be defibrillated, the Multistrada handles beautifully. It stays composed even after hitting a bump in mid-corner, and more pressure on the bar makes it bank over farther as the radius decreases. It’s hard to heap enough praise on this motorcycle. Three years ago I asked the actor Dax Shepard about his Multistrada, and he said, “It’s the finest motorcycle ever made.” Many improvements have been made since then.

At Big Bear, I turned onto Route 38 and climbed even higher to Onyx Summit, at 8,443 feet. According to the website Dangerousroads: The World’s Most Spectacular Roads, Onyx Summit ranks as number seven among the highest paved mountain passes in California and is the only one of the top 10 that is outside the Sierra Nevada range. The air temperature was in the 50s, so I fired up the heated grips. Bigcone Douglas firs grow here, one of the selected areas of Southern California where they are found, and I beheld these monsters in wonder. With only light traffic, it was no big deal to pull off anytime.

Beyond this point came more miles and miles of sweeping turns and occasional tight ones, a stop at the restaurant in Angelus Oaks, and the long serpentine descent to Mill Creek Canyon, which presents the turnoff to Yucaipa. Motorcyclists in Florida, the entire Midwest, and maybe even Texas would give anything to have a road like Route 38 nearby. I’d left around 1 p.m. and was back home just before dark, having logged about 175 miles and enjoyed an early dinner. The Multistrada went back into the garage like a sled dog going into its little house after a trail workout. An exotic that can do it all, this bike was once again my little secret.