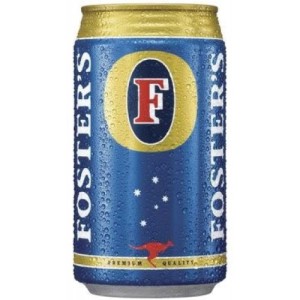 Did I ever mention that my nearby town of Desert Hot Springs is full of the downtrodden and dispossessed?
This afternoon I lined up at the supermarket checkstand behind a tattered, tufted guy–shirt untucked, jeans rolled up to mid-calf, sagging white socks–of about my same age, talking out loud, humming a song snippet, looking around, and of course I just knew he would comment on my Foster’s beer behind the divider bar separating his order of two boxes of candy.
Comment he did, indeed, saying, “Australian for beer.”
But that wasn’t going to be the end of it, so he continued, “I was was watching a video the other day of two deer standing up fighting each other. They were really going at it.”
I said that I didn’t see the connection.
This cruel remark cut my poor, sensitive, mussed interlocutor to the quick. “I was just telling a story.”
So I pointed out that he had repeated the Foster’s ad slogan, then without any segue whatsoever jumped to a tale about animals fighting.
“They have little hooves.” He made his hands into creepy little hooves before laying out his thesis. “You don’t see kangaroos fighting every day.”

Ah! Now it was kangaroos! I pulled out my phone, found momentary relief by studying my beautiful screensaver, and wished for immediate receipt of another selfie from the same benevolent source. Or at least a new email message to be read. But nothing really required my attention.
By now the cashier, Maria H., started to ring up his order. “Woo!” he told her. “Hot for a bike ride.”
She told him the amount and took the money.
Then he departed with his candy, and making sure he was well out of earshot, I said, “What a freak.”
“I see them all day,” Maria H. said. “I don’t pay no attention.”
Five o’clock is eagerly anticipated.